EURONEWS (http://www.euronews.net), the multilingual European TV channel, reports that scientists in Lugano, Switzerland have been developing a way to optimise the movement of a fleet of trucks to make delivery services more efficient. Their unlikely source of inspiration has been the master of logistics in the natural world- the ant. Watch the video

Metaheuristics like ant colony optimization (ACO) can be used to solve combinatorial optimization problems. In this paper we refer on its successful application to the vehicle routing problem (VRP). At the beginning, we introduce the VRP and some of its variants. The variants of VRP were designed to reproduce the kind of situations faced in the real-world. Further, we introduce the fundamentals of ant colony optimization, and we present in few words its application to the solution of the VRP. At the end, we discuss the applications of ACO to a number of real-world problems: a VRP with time windows for a major supermarket chain in Switzerland; a VRP with pickup and delivery for a leading distribution company in Italy and an on-line VRP in the city of Lugano, Switzerland, where clients’ orders arrive during the delivery process.

Riders on a swarm

Mimicking the behaviour of ants, bees and birds started as a poor man’s version of artificial intelligence. It may, though, be the key to the real thing 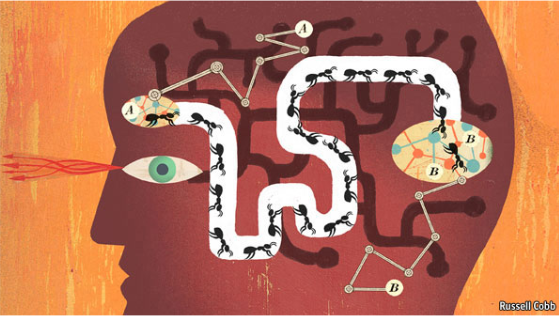 "Research in social insect behaviour has provided computer scientists with powerful methods for designing distributed control and optimization algorithms. These techniques are being applied successfully to a variety of scientific and engineering problems. In addition to achieving good performance on a wide spectrum of "static" problems, such techniques tend to exhibit a high degree of flexibility and robustness in a dynamic environment".

What do ants and bees have to do with business? A great deal, it turns out. Individually, social insects are only minimally intelligent, and their work together is largely self-organized and unsupervised. Yet collectively they're capable of finding highly efficient solutions to difficult problems and can adapt automatically to changing environments. Over the past 20 years, the authors and other researchers have developed rigorous mathematical models to describe this phenomenon, which has been dubbed "swarm intelligence," and they are now applying them to business. Their research has already helped several companies develop more efficient ways to schedule factory equipment, divide tasks among workers, organize people, and even plot strategy. Emulating the way ants find the shortest path to a new food supply, for example, has led researchers at Hewlett-Packard to develop software programs that can find the most efficient way to route phone traffic over a telecommunications network. Southwest Airlines has used a similar model to efficiently route cargo. To allocate labor, honeybees appear to follow one simple but powerful rule--they seem to specialize in a particular activity unless they perceive an important need to perform another function. Using that model, researchers at Northwestern University have devised a system for painting trucks that can automatically adapt to changing conditions. In the future, the authors speculate, a company might structure its entire business using the principles of swarm intelligence. The result, they believe, would be the ultimate self-organizing enterprise--one that could adapt quickly and instinctively to fast-changing markets. Link to the paper

IDSIA, Istituto Dalle Molle di Studi sull'Intelligenza Artificiale is a research institute active in both theoretical and applied research in the field of Operations Research and Artificial Intelligence. Since 1996 IDSIA has capitalized on the results obtained in the theoretical field applying them to real world logistics and transport application.

“The Flexible Job Shop Problem is an extension of the classical job shop scheduling problem which allows an operation to be performed by one machine out of a set of machines. The problem is to assign each operation to a machine (routing problem) and to order the operations on the machines (sequencing problem), such that the maximal completion time (makespan) of all operations is minimized. To solve the Flexible Job Shop problem approximately, we use local search techniques and present two neighborhood functions”.

With AntRoute AntOptima implements this technology for Logistics provider to speed up their business in terms of time and efficiency. The integrated high performance Tour Optimiser of AntRoute based on ACO and is automatically able to optimise thousands of daily orders in a few minutes considering the company related constraints like truck fleet, client time windows, unit load, access limitation, etc. (Published on Logforum.net)

A single ant or bee isn't smart, but their colonies are. The study of swarm intelligence is providing insights that can help humans manage complex systems, from truck routing to military robots. Link to article

With AntRoute AntOptima implements this technology for Logistics provider to speed up their business in terms of time and efficiency. The integrated high performance Tour Optimiser of AntRoute based on ACO and is automatically able to optimise thousands of daily orders in a few minutes considering the company related constraints like truck fleet, client time windows, unit load, access limitation, etc. (Published on Logforum.net)

January 2007: which transport operator should I engage?

Responding to a growing interest and to AntOptima's upcoming presence at the international Hannover Fair "get new technology first", we are pleased to inform you about AntNgage, the new member of the innovativ product family AntRoute in the field of transport planning optimization. AntNgage is a software application for the automated optimization of the fleet engagement according to the tariff schemas of various transport operators. AntNgage chooses in a few minutes for each tour the best available vehicle based on objectives and terms depending on the company. Multiple objectives are possible: - Minimization of costs - Minimization of full/empty vehicle movements - Minimization of empty kilometers for the next day - Attainability of annual target kilometers for any vehicle - Maximization of the feasibility of tours For more informations and/or presentations of the demo version AntNgage locally don’t hesitate to contact us.

AntOptima adverts on forthcoming ECR-Day in Hamburg. Especially for the logistics interested parties GS1 Germany in collaboration with BVL organized the Logistik Forum 1 at the 11th september from 2 p.m.-4 p.m. For these sequence AntOptima is pleased to co-organize the speech of Barilla Group: "Optimizing food and grocery products distribution: a sample project" and to make a contribution to this interesting event.

The AILOG Conference, held in Bologna from the 28th till 29th October 2005, discussed on which tools and logistics actions are necessary to support the Italian enterprise and which policies apply in order to coordinate industry and logistics on the international field. The event was organized by AILOG and promoted by Interporto di Bologna and Italmondo Servizi ed Editoria.

Visit from Swiss ambassador in Germany Dr. Blickenstorfer and his deputation

AntOptima was pleased to present their innovative solutions for the logistics and production sector to Dr. Blickenstorfer and his deputation.

In occasion of 300th anniversary of Leonhard Euler, famous Swiss mathematician, and in collaboration with "Presence Switzerland, Federal Department of Foreign Affairs (DFA) AntOptima presented to a Media Delegation from Japan innovative and state-of-the-art optimization methodologies for the logistics market.

Alessandria will accommodate a cycle of national meetings on the City Logistics, organized by Dipartimento di Ricerca Sociale and by Master in Sviluppo Locale dell’Università degli Studi del Piemonte Orientale and Corep, in collaboration with Comune di Alessandria. The meetings will deal with the problem of the urban distribution of goods in order to better understand the issue of city logistics, that often is not taken in consideration as much as people transportation. The program of “City Logistics week” is splitted in 4 meetings with the participation of the most Italian experts in transportation and City Logistics.

AntOptima will take part in Transpotec Logitec, the internationall fair on road transport, intermodal services, and logistics. The fair will be held in the new Milan Fairgrounds from 27th till 30th of April 2006. AntOptima will also deliver a Seminar on 28th of April at 4 o'clock p.m. titled "OPTIMISE to compete: the case of Number1 Logistics Group".

16-20 April 2007 HANNOVER Fair: “Get New Technology First” (Hall 2, Stand C25) AntOptima will take part in HANNOVER MESSE, the international fair on new technology. The fair will be held in the Hannover Fairgrounds from 16th till 20th of April 2007. AntOptima will be present with a booth (Hall 2 / Stand C25) to show the latest and most advanced products for the logistics, transportation and production sector. Official presentation of the latest optimization tool from the AntOptima product family: AntNgage - automatic freight costs optimization For tickets free of charge don’t hesitate to contact us. Auf Wiedersehen in Hannover!

Rome, Italy – 4th meeting of National Observatory on transportation and logistics: "Logistics and companies: searching for competitive advantages with a weak will of integration"

The next 14th December will take place by headquarter of “Consiglio Nazionale dell’Economia e del Lavoro” the annual meeting where the inquiries realized by the Institute will be presented.

AntOptima will be present with a booth at the 23rd German Logistic Congress, Berlin, hosted at Dorint Sofitel Schweizerhof from the 18th till the 20th of October. AntOptima will show the latest and most advanced products, with innovative ideas and outstanding performance. In 2005 the congress was attended by more than 3000 participants (decision makers, managers, logistic specialists) from over 25 countries. You can download the registration form at http://www.bvl.de/361_2 Auf Wiedersehen in Berlin!